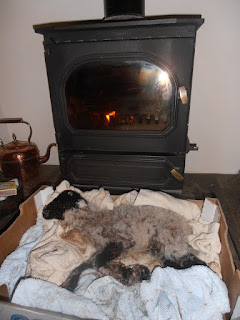 Shortly after this little chap was born he slipped into a watery ditch.  When Chris fished him out and brought him to me he was barely alive.  He was completely motionless and making the most awful gurgling noises.  We think he had taken in water and I was concerned that pneumonia would set in.  I put him by the log burner and dried his sodden body and cold legs and left him to rest. 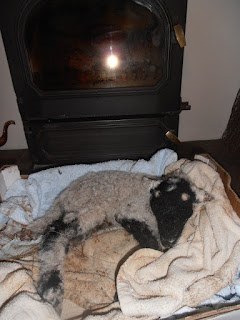 Soon his breathing settled down and about an hour and a half later he started to lift his head and open his eyes.  We gave him half a bottle of milk and he began to bleat for his mother. 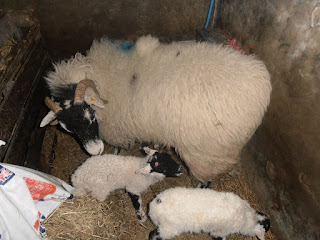 His mother and twin were in a small pen in the building and we put him in with them.  There was a chance that the ewe would reject him but she accepted him straight away.  It is wonderful how quickly he recovered.  This photograph was taken the next morning.  He is 12 hours old and back on his feet.  Amazing!