Filming on the Farm 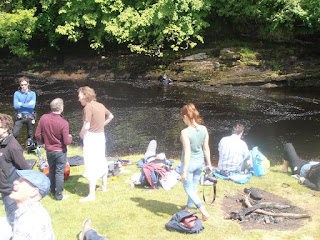 There is a new comedy film being made about the Coast to Coast called Down Hill and on Monday 18th June they were filming on the farm. 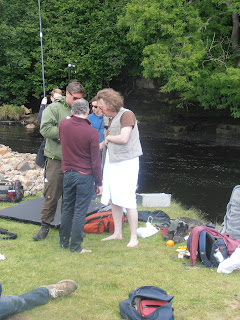 It is about four chaps who are old school friends who decide to have an adventure before they are 'over the hill'.  The scene they are shooting is by the river at The Smithy.  I think I recognised the bloke in the towel but I don't know who he his.  He is waiting for a pair of underpants!  The producer's wife was mending them.  They are pretty hideous; tatty blue boxer shots with hamburgers on them!  I was told the repair was to ensure his 'tackle' didn't escape.  I expect that after he'd been in the water there would be little danger of that! 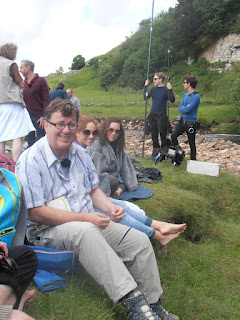 Just as I was leaving the girl with the long dark hair was walking into the river in a bikini!  Brave girl.  It was a nice day but the water was freezing.  The next day they were filming in the village and they also did some work at Ravenseat.   When is it going to be on the big screen?  I don't know but keep a look out as it could be worth watching.

A couple of weeks ago Scrappy Doo and his mother with gathered in from the fields around the farm and taken out onto the fell.  Before they went Scrappy Doo was given her own personal ID and her mother's ID was noted down so that we will always know her parentage.  She was tagged up, checked over and given a clean bill of health and then transported along with other ewes and lambs to their acknowledged heft on the moor.  A heft is a particular area on the fell.  Hefted sheep instictively know which is their 'patch' or 'heft' and pass on this knowledge to their young.