Today Chris and Raymond finished horn burning the gimmer hoggs ( a gimmer hogg is a female sheep born last April).  Horn burning is similar to branding but as it is applied to the sheep's horn it causes no pain.  A mark is burnt into the horn as a way of identification and is a traditional method, used for generations, before plastic sheep tags were introduced.  The practise continues because ear tags can be lost or tampered with but a horn mark cannot.  Each farm has a different set of initials and it is this that forms the mark.  For example Pry House Farm horn burn mark is CAS, the initials of a landowner from the past.  On the vast open fell it is not unusual for a sheep to wander for many miles or get missed at gathering times.  It may turn up with another farmer's sheep, when this happens it can be immediately identified by its mark and returned.
Posted by Pry House Farm at 14:59 No comments:

The Dales on ITV

The second series of The Dales on ITV was broadcast last night. It features a family called the Owens who farm at Ravenseat, just a mile and a half from us.  Clive and Amanda are farmers like ourselves however unlike Chris and I they have six children!  The programme was very good and featured Amanda's Shepherd's Hut beautifully.  I can recommend it as my sister and her husband stayed in it last September and they loved it.  It is situated in the most idyllic setting imaginable.  See for yourself at http://www.ravenseat.com/ and watch the rest of the series to see more about this lovely family.
Posted by Pry House Farm at 04:12 No comments: 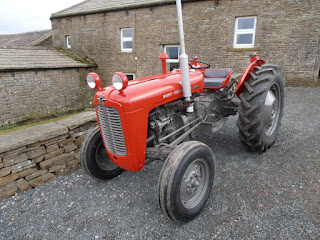 This is Chris's latest addition, a Massey 35. He bought it before Christmas but it has been at Chris Whitehead's garage near Thirsk for a bit of fine tuning until this weekend. I am calling it Clive the Thirty Five and he is Fergus the Grey Fergie's new friend. I particularly like the way the headlights stick up above the bonnet like eyes! Unlike the Fergie this little tractor may well do some work on the farm in haytime. They are both fit for work but as Fergus holds a lot of sentimental value (been in the family for nearly sixty years and also did a marathon 190 miles, Coast to Coast, last year for charity) he is fully retired and only comes out to play. 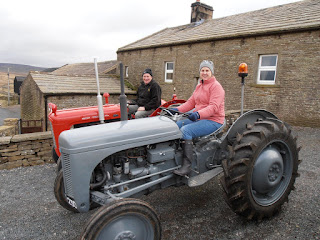 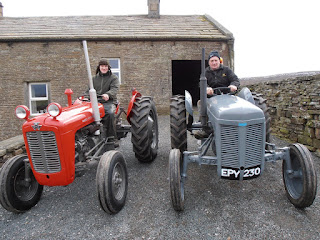 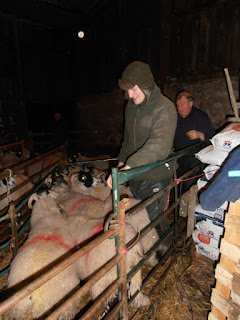 Tonight we had the first of our sheep scanned. By the end of this month all of our sheep will have been through this procedure. We scan because it is useful to know which sheep are carrying twins. Each sheep stands in a special crate next to where the scanning equipment set up. The scanner is passed over the sheep's belly and immediately our scanning man can see on his screen if the sheep is carrying one, two or three lambs. If the sheep is having twins a blue mark is applied on the shoulder and if its triplets the mark is applied behind the head. Up to now, no triplets but lots of twins!

During lambing time if Chris comes across a sheep with a blue mark on its shoulder that only has one lamb then he knows to start investigating. The second lamb might not yet be born, it could be dead, it might be lost or another sheep may have mistakenly taken it as her own. When the later happens it is known as 'mis-mothering'. Swaledale sheep are marvellous mothers but occasionally get confused. The one having twins has had her first lamb and is so besotted with it that she doesn't realise she's having a second one! Another sheep is about to give birth and is so keen to have a baby that she thinks the twin lamb is hers and 'adopts it'.

All the shearlings (that is the name for a ewe having a lamb for the first time) lamb indoors in large lambing sheds.  Mis-mothering is more common indoors as the sheep are more confined.  When we see that a shearling, which marked for twins, is close to lambing we will put her into an individual pen so that she can keep her lambs close, feed and bond.

Older sheep rarely have problems but if there is cause for concern it is good to know if it is a single or twins that are due so that extra care, rations etc can be provided. 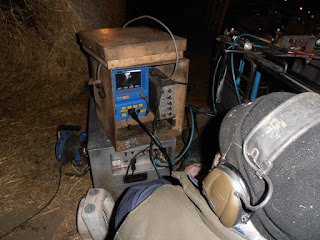 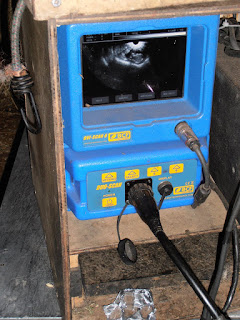 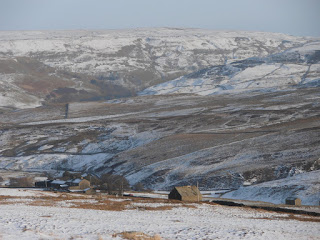 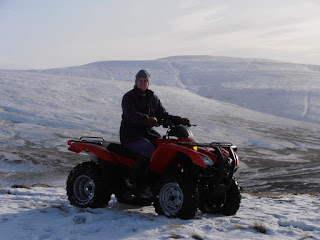 On Birkdale Moor with Great Shunner Fell behind

If you are familar with the fells you may have noticed strange circular enclosures on the fellside.  These are called Sheep Folds or Laying Folds.  A six foot high, dry stone wall construction, generally built in a circular shape, to offer maximum shelter from all wind directions.  The position of the fold was chosen as a place of safety and shelter from drifting snow and is where the sheep are fed daily in bad weather conditions.   Each 'Heft' (a heft is a group of sheep, more about this later) has its own fold, know locally as Laying Folds.  Quite often a small fodder building can be found close by.  In the days before 4x4 tractors and quad bikes, hay would be stored in these buildings so that it didn't have to be carried daily from the farm.
Posted by Pry House Farm at 15:18 No comments:

A friend of mine has been telling me about Candlemass Day.  It was on February 2nd and is signals the end of Christmas.  There is a lot of myth and folklore surrounding Candlemass, particularly regarding the weather.
"If Candlemass Day be bright and fair,
The half of winter is to come and more."

Its was a beautiful day here on Thursday, very cold but sunny with a bright blue sky and no wind.  Then today the snow has come, swirling and drifting as it is driven by the wind.  Is this the curse of Candlemass???
Posted by Pry House Farm at 14:58 No comments: