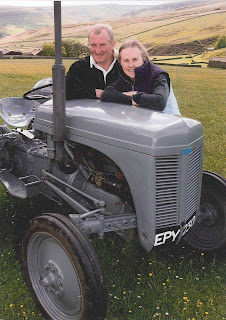 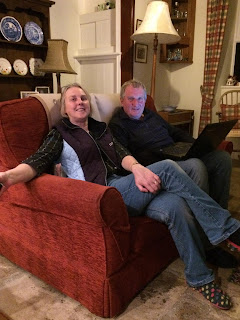 Having let Pry House as a self-catering holiday house for over three years Pry House Farm finally became our home on 27th February 2009.
We'd sold the house in Startforth in the January and lived for a short time with my Dad.  On 27th February I arrived at Pry House driving a large van just in time to say goodbye to our very last holiday house guests.  Guests who had become friends and who we still keep in touch with.  For the rest of the day Chris and I trundled back and forwards between Teesdale and Swaledale ferrying our worldly goods to our new home.  Everything went smoothly until the last journey when we called at the Co-op in Kirkby Stephen for provisions and at the check-out discovered  I hadn't got my purse, I only had a cheque book so no cash or cards.  Exhausted and weary I almost burst into tears at the thought of no cup of tea, no supper, no breakfast the next morning.  But 2009 was the Good-Old-Days and the lady on the check-out had farming connections, recognised Chris and got the manager to authorise my cheque without a guarantee card.  I could have kissed her! 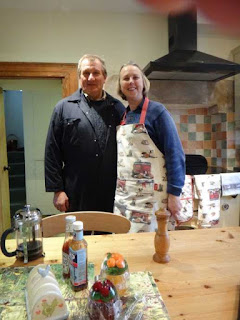 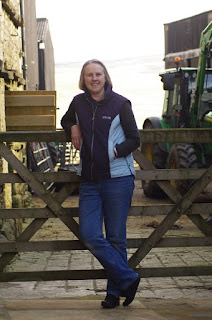 Our first bed and breakfast guests arrived in March 2009.  It was when the Coast to Coast was on a roll after the Julia Bradbury programme and I really hit the ground running!  I love living at Pry House Farm, helping Chris on the farm, being a bed & breakfast hostess and sharing our way of life with our guests.  I have learnt many new skills including writing this blog, keeping calm in a crisis and how to hold my tongue! 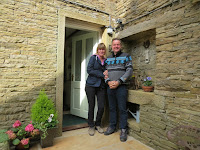 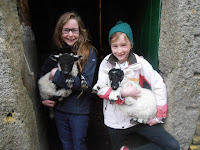 Over the past 10 years we have welcomed hundreds, possibly thousands, of people into our home from all over the world, from all walks of live; families, couples and companions.
Many return again and again and we love to see them.
Whether you have stayed at Pry House Farm B&B in the past or are thinking about a first visit - do come and see us.
www.upperswaledaleholidays.co.uk

Wow, what excitement!
Scanning day - will they or won't they be in lamb? 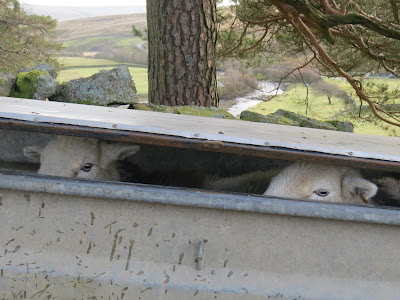 First we had to gather them up and get them in the trailer.
Only took two attempts.  So far so good. 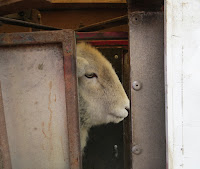 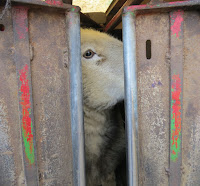 Next they were transferred to the scanning trailer in which the equipment, screen and scanning man sit.

I just couldn't believe it!  Hetty is carrying twins and Heidi is having a single.  Thrilled to bits.  Can't wait for lambing time now. 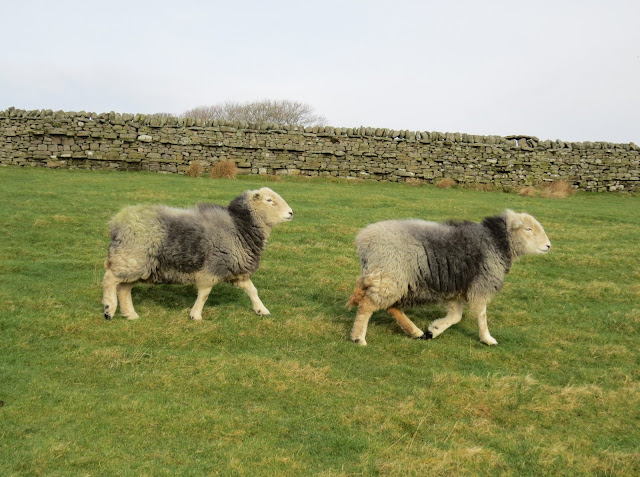 The herdys are now happily back in their field.
I'm so pleased.  Extra rations and plenty TLC is in order for these special girls.
Posted by Pry House Farm at 11:18 1 comment:

On a absolutely beautiful February afternoon I went with Chris to help with the scanning.
These are some of our sheep that are 'wintered away'. As you can see from the tree covered hills, hedges and flat fields we are along way from home. 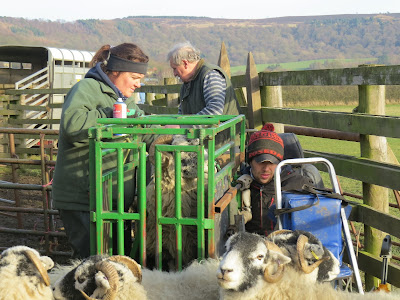 Once all the scanning equipment is set up each sheep goes into the crate to be scanned. 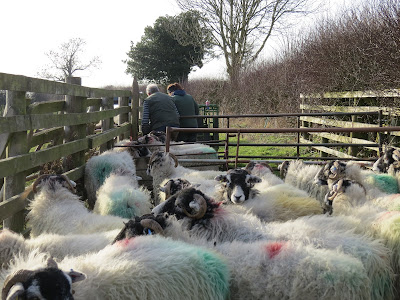 Scanning helps us prepare for lambing time
as we know exactly how many lambs each sheep is carrying. 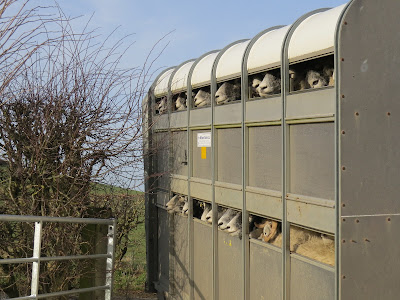 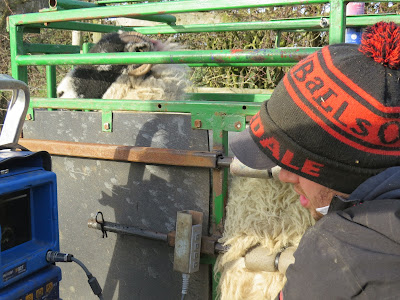 Looking to see if she is carrying a single, twins or triplets.
The sheep are marked if they are having twins or triplets or none at all (it happens).
This information makes life a lot easier for us during the lambing season. 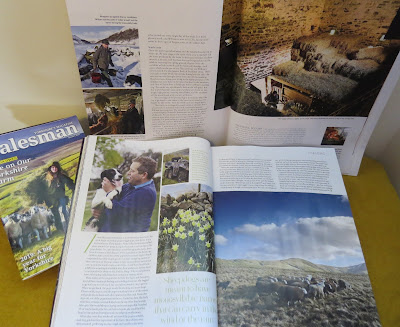 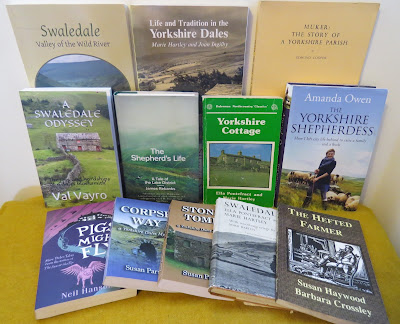 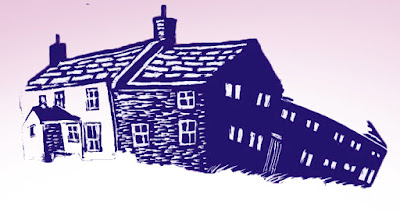 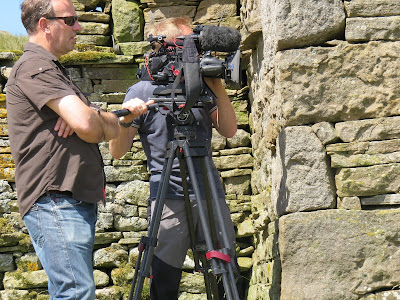 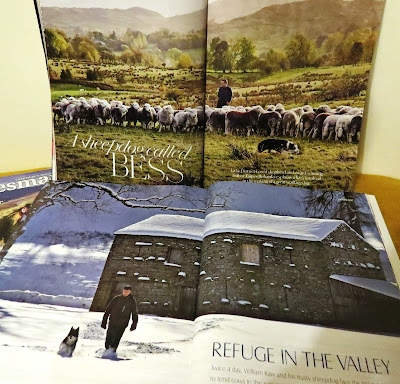 And finally there has been two excellent magazine articles recently;  Muker farmer, William Raw is featured in December's issue of Landscape magazine describing how he is one of the last farmers to use his cow houses as they were originally intended namely to house cows during winter and to store hay, made in summer, from the meadow fields in which the cowus stands.  James Rebanks, author of The Shepherd's Life, is in March's edition of Country Living magazine talking about the bond he has with his young sheep dog, Bess.  Before you shoot me down in flames, yes I know James farms in the Lake District and is not a Yorkshire farmer however his book The Shepherd's Life is a gutsy, honest, genuine account of what its like to live and work on a hill farm and almost mirrors exactly our life here at Pry House Farm.  Read it.
Posted by Pry House Farm at 12:55 No comments:

When its grey & gloomy outdoors do something colourful indoors 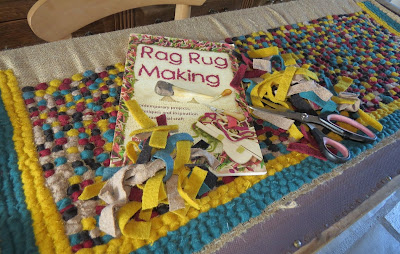 Having slipped and slid my way down to feed the herdys and puffed and panted my way back ...... 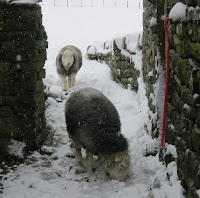 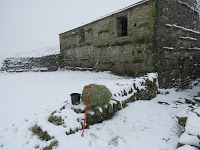 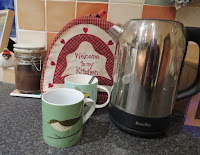 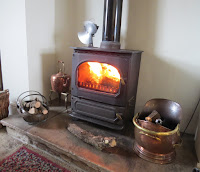 It feels good to

pull off the wellies,

get the kettle on and get crafting.

I don't paint, I can't knit or sew but I can prod! 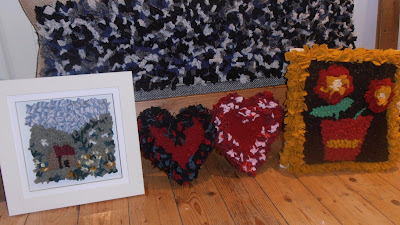 I have made all sorts of things over the last few year mainly small decorative items but my aim at the moment is to complete a proddy rug that I have had on the go for ages.  It is three quarters finished and I have already cut up 3 wool coats, 2 wool jumpers and a single blanket!