Hillcrest Cottage is looking lovely this spring.
We are pleased with the amount of bookings we have so far but there is still plenty availability.
Are you or do you know anyone who is looking for a cottage in the Yorkshire Dales?
Then please get in touch. 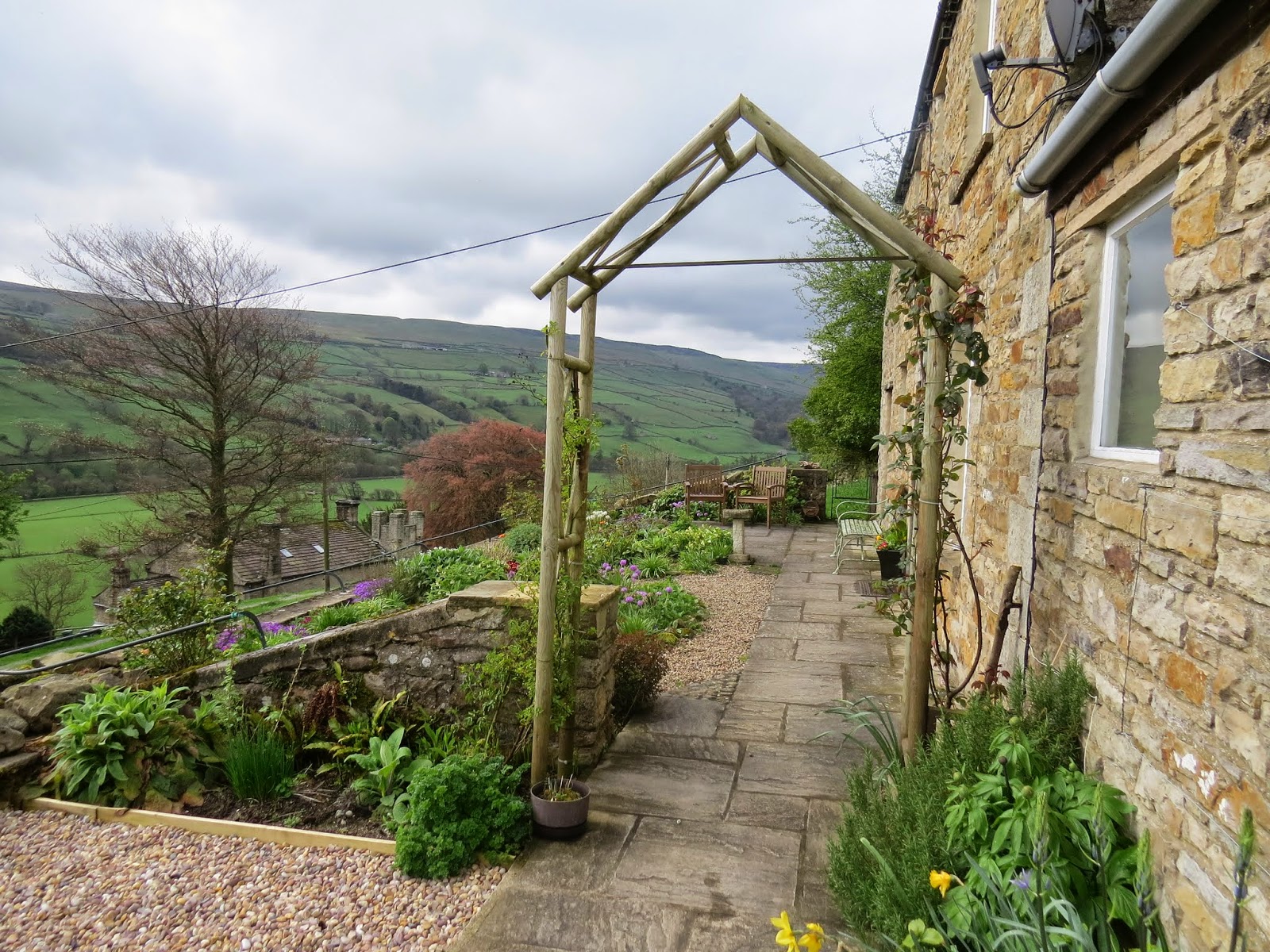 The garden is full of spring flowers 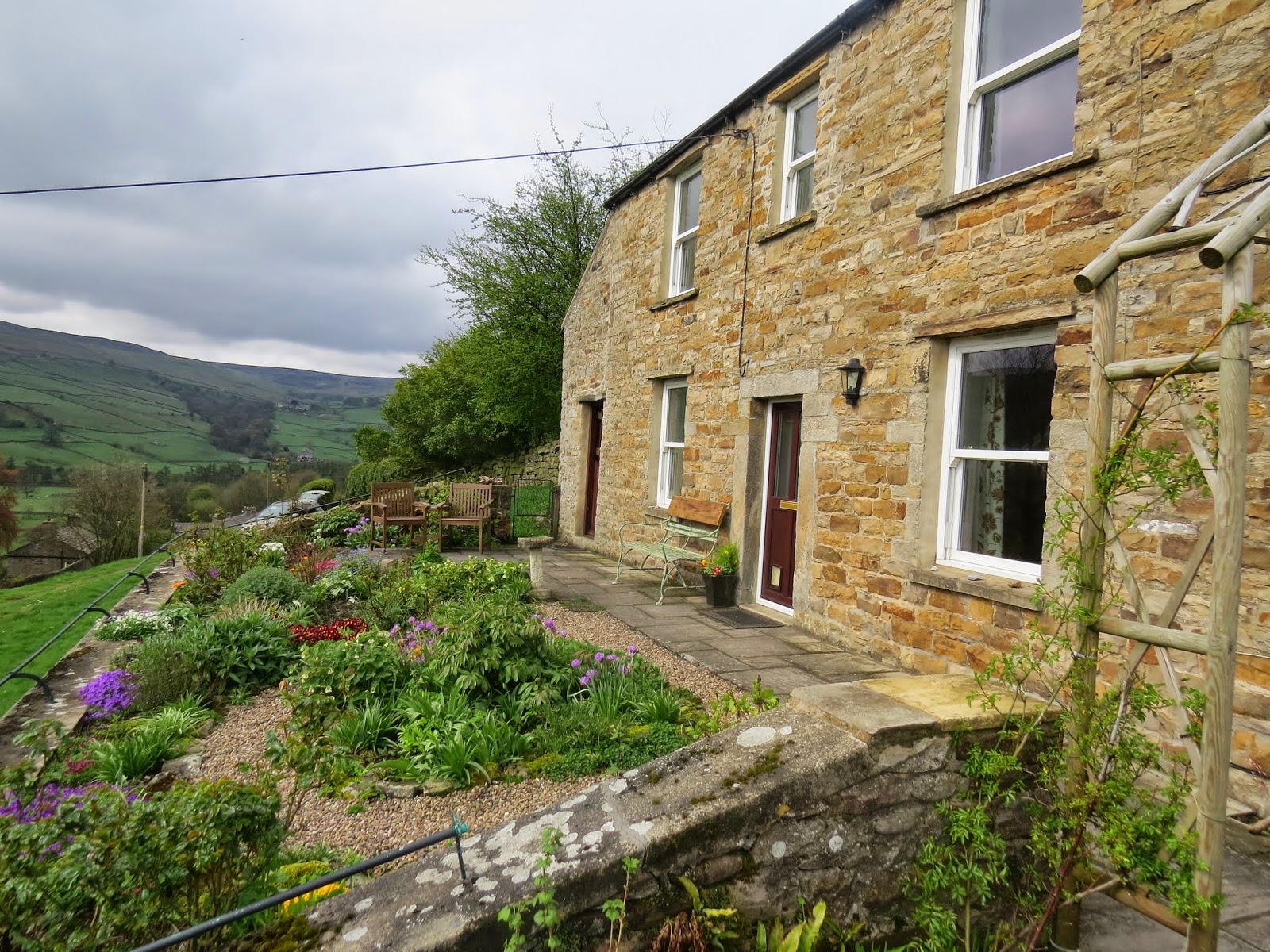 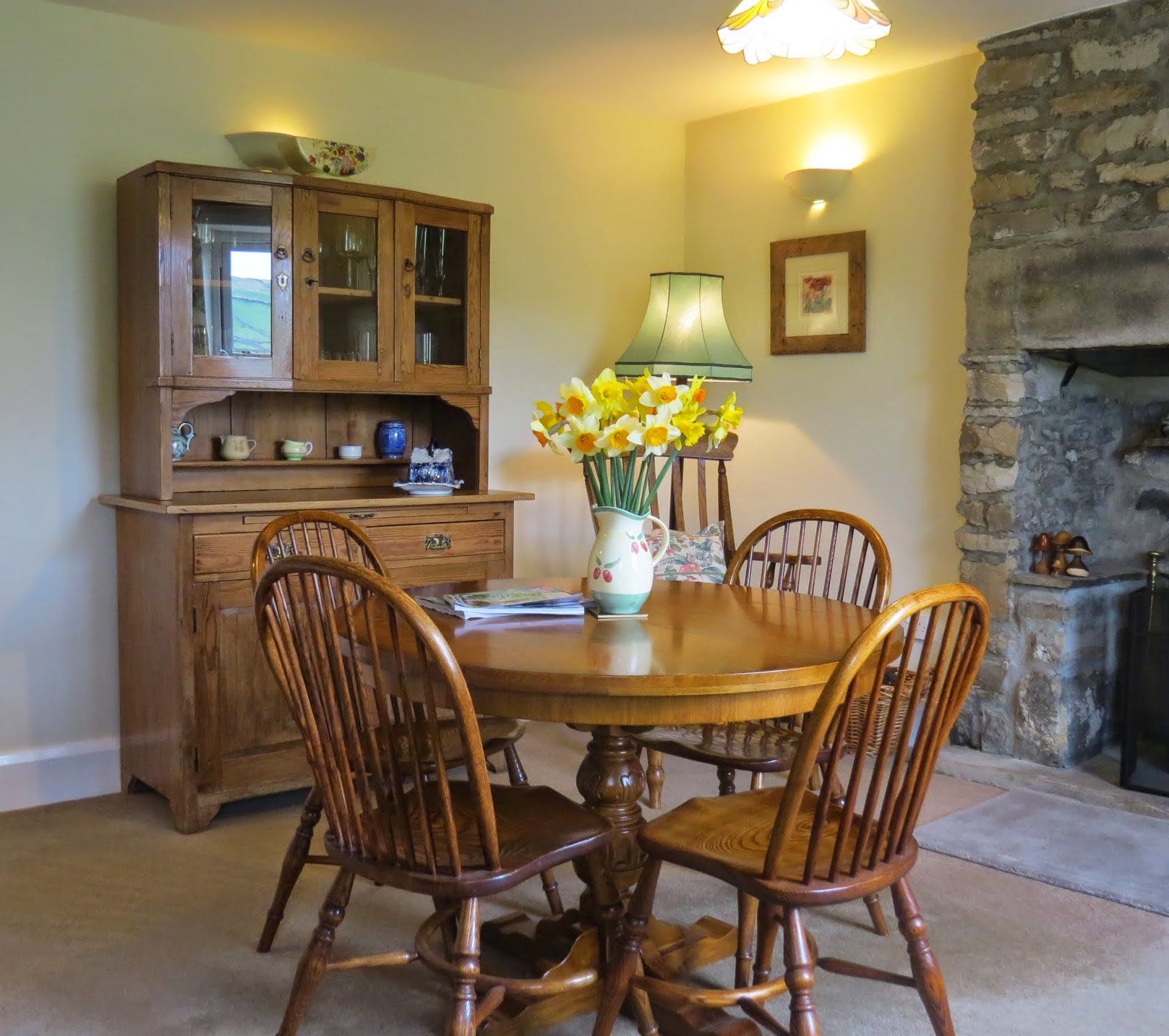 Daffodils on the dining room table
﻿ 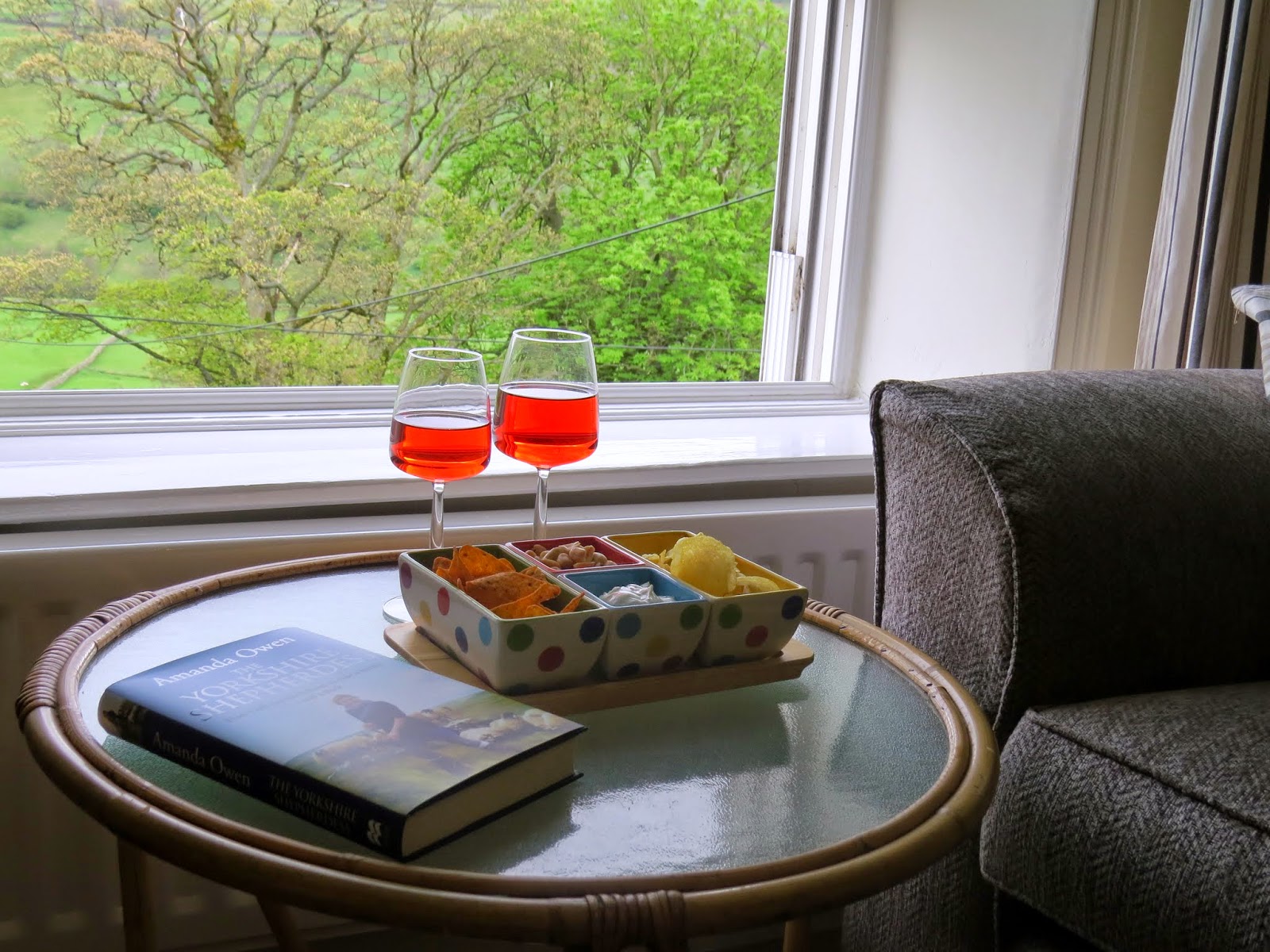 The view from the sitting room window is vibrant, fresh, green .....
﻿ 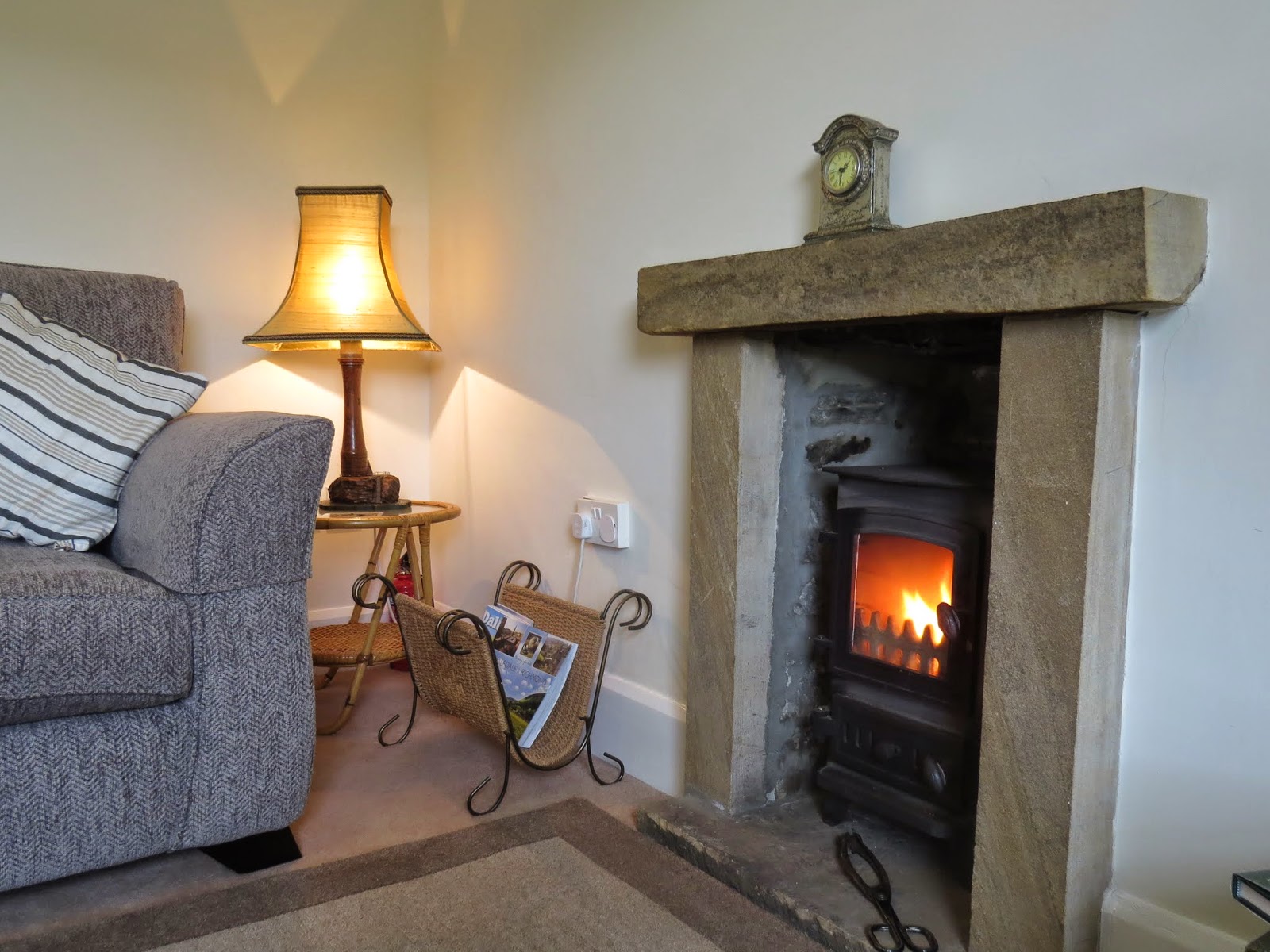 but its still nice to sit by the fire in the evening.
﻿ 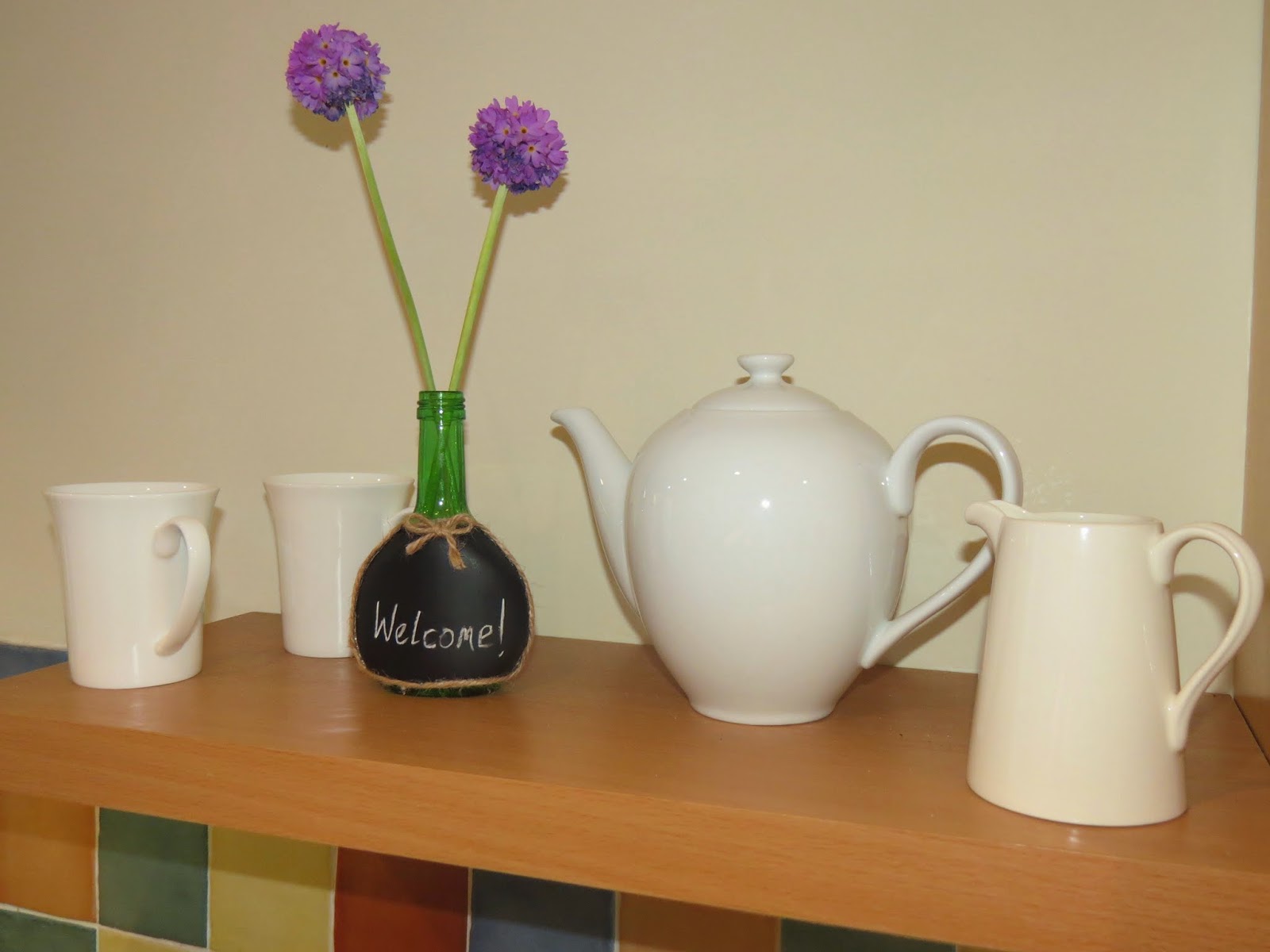 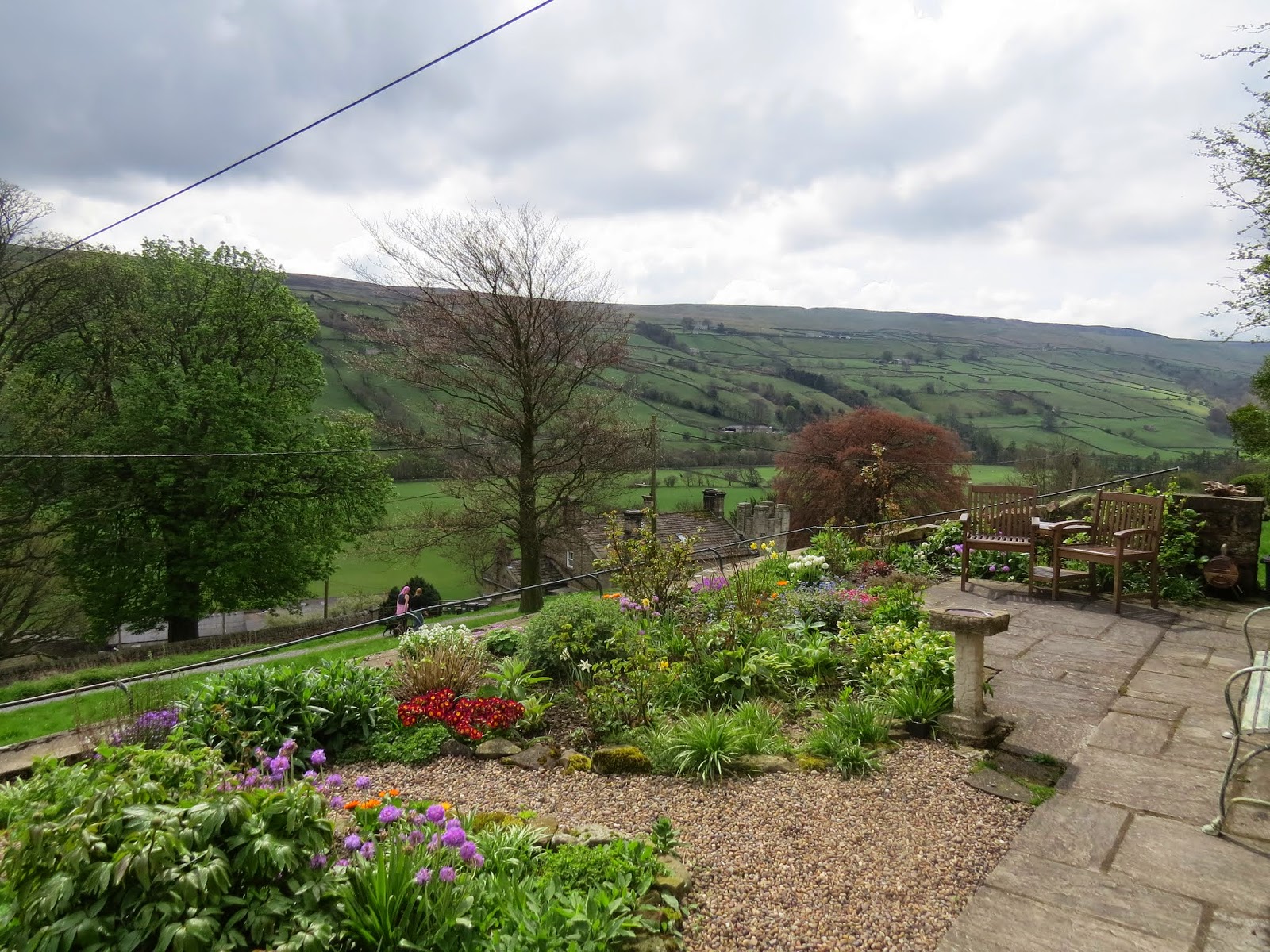 Lots to do at Lambing Time

Lambing time is probably the busiest time in the farming calendar.  It is also the only time of year I can be of any help to Chris as there is lots of jobs to do and lots of ways I can lend a hand.
This morning we had a bit of a clear out in the building and turned out, into the fields, several ewes and lambs.  And there's more to it than just opening the building doors .............

The Drama of the Lost Lamb 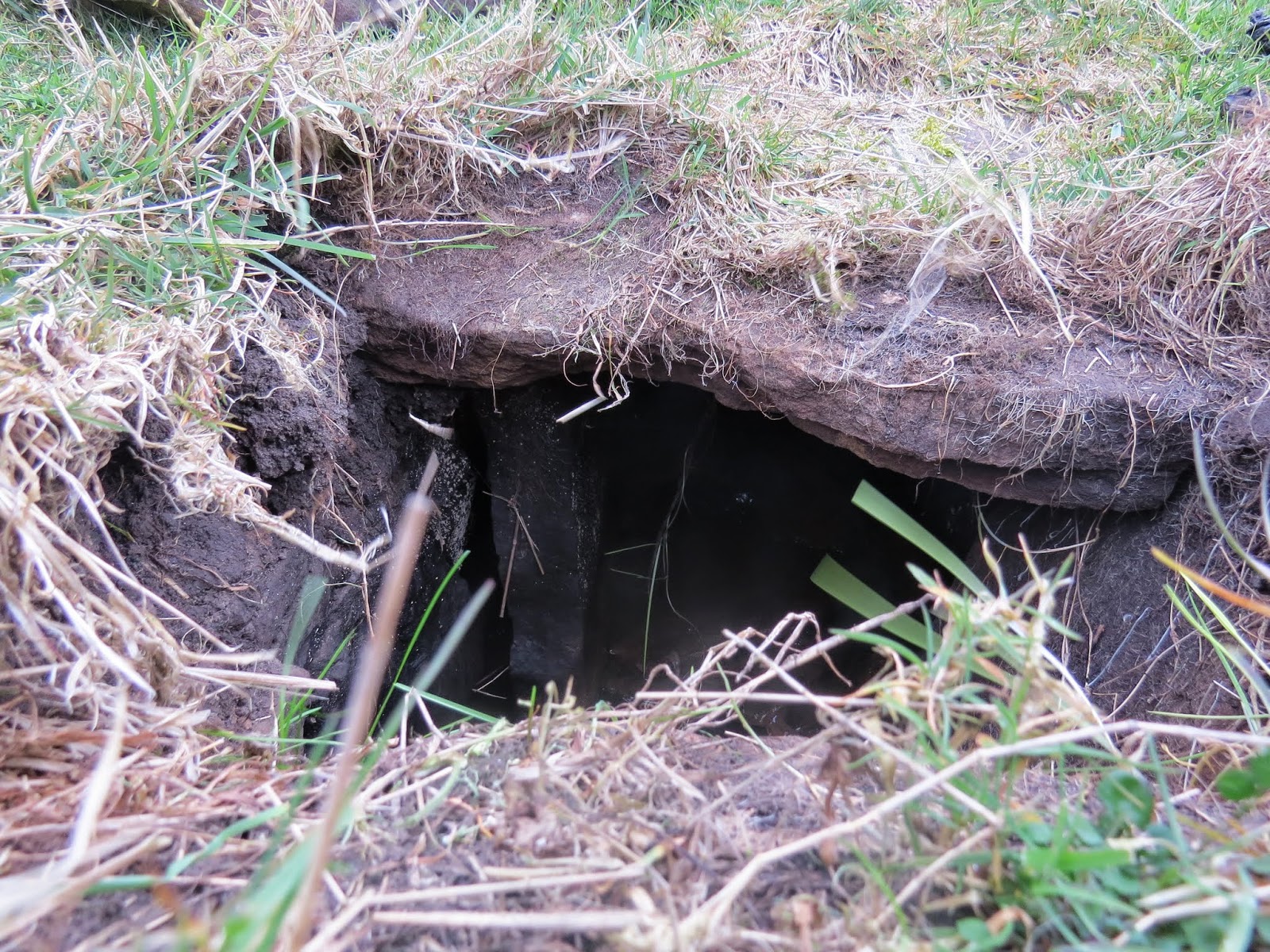 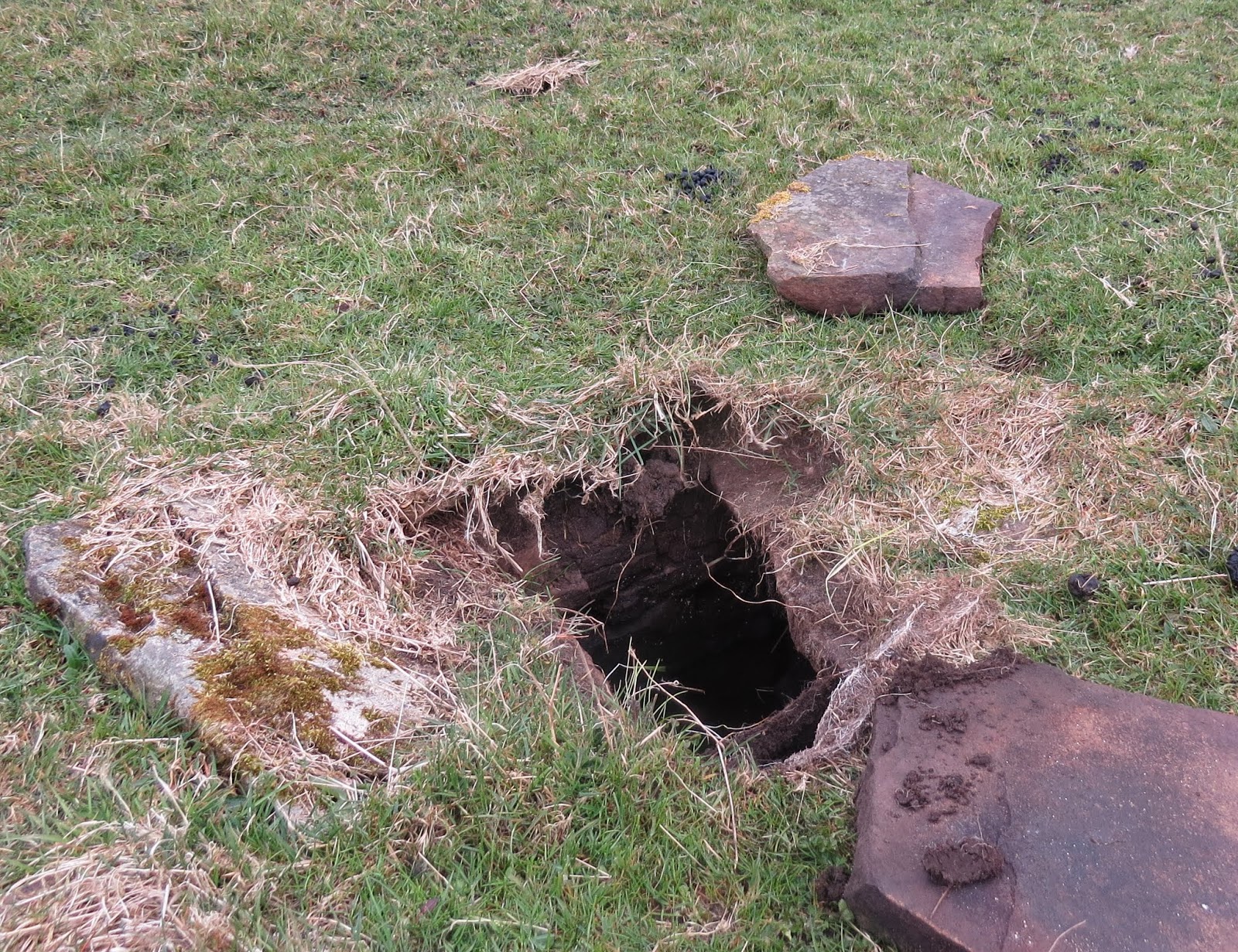 Many of our pastures have field drains running across them.  Beautifully constructed of brick and stone and topped with heavy stone flags, they help to drain water from the land and surrounding high ground.  Over time, due to land erosion and heavy machinery, the top stones can move forming a small gap which can easily go unnoticed producing the perfect LAMP TRAP. 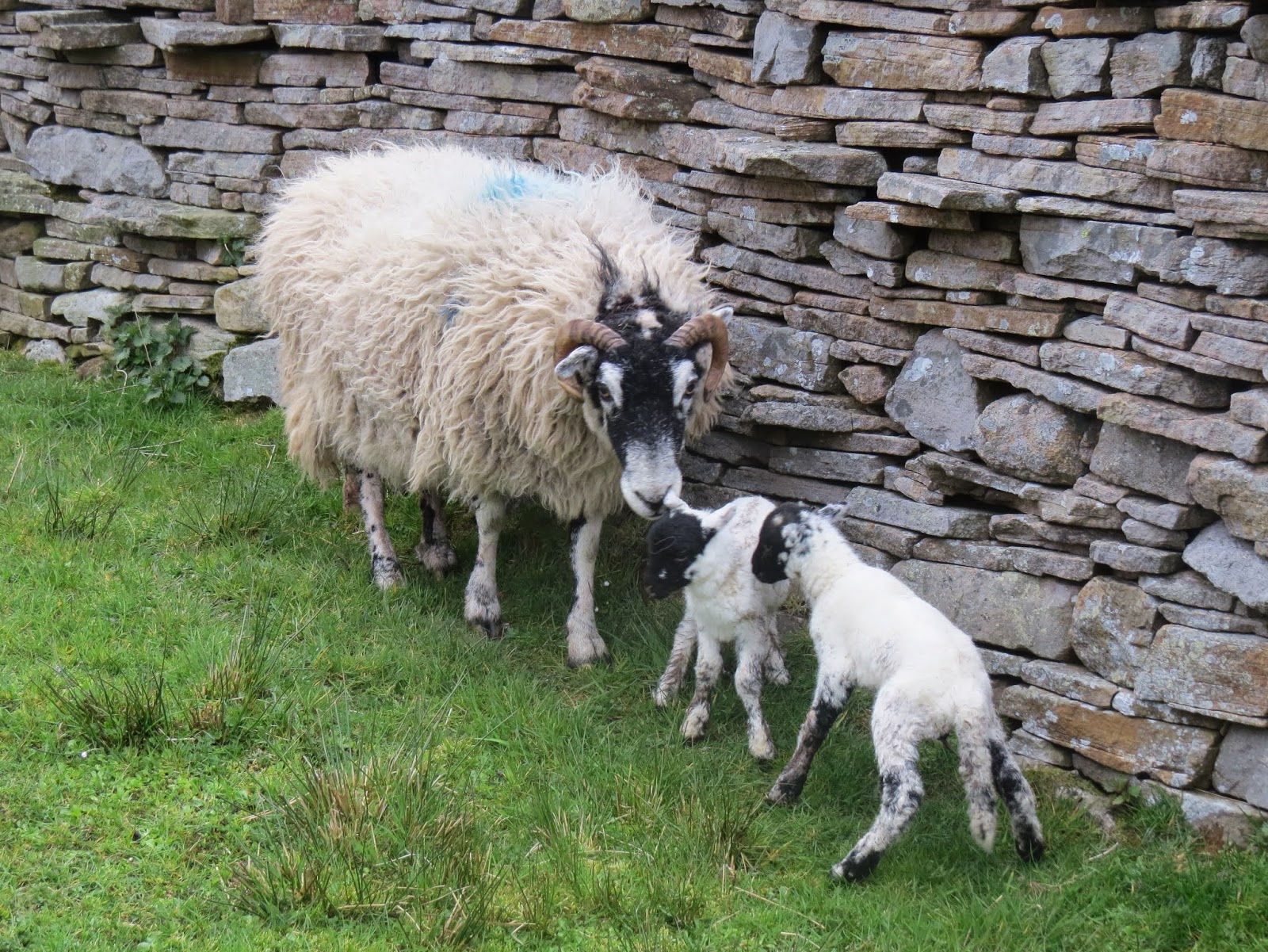 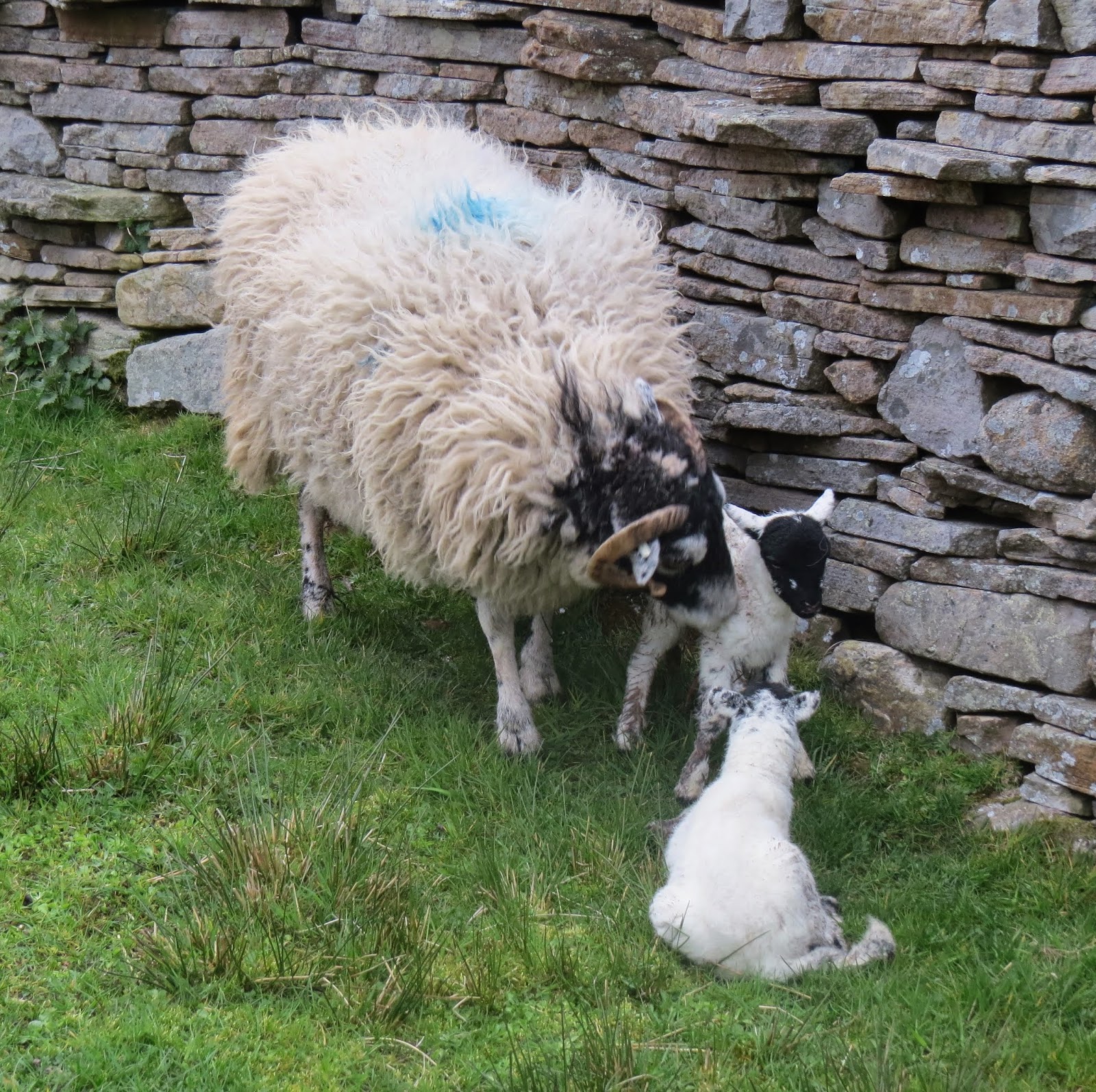 This ewe gave birth to her twins this afternoon and about 3 hours later they both disappeared! Chris spotted the sheep hanging around the area of the covered drain and soon discovered the tiny gap where the lambs had slipped in.  He was able to rescue one immediately but its twin took a bit longer to find.  The trouble is they go wandering off down the length of the field drain and the only way to find them is to take off the top stones, lay spread eagled on the ground with your head down the hole making baa.. baa..ing sounds!  Eventually after repeating this every 10 feet or so we heard faint bleating and after much baa...ing (in an attempt to sound like its mother) managed to persuade it to come towards the open hole and it was lifted out. 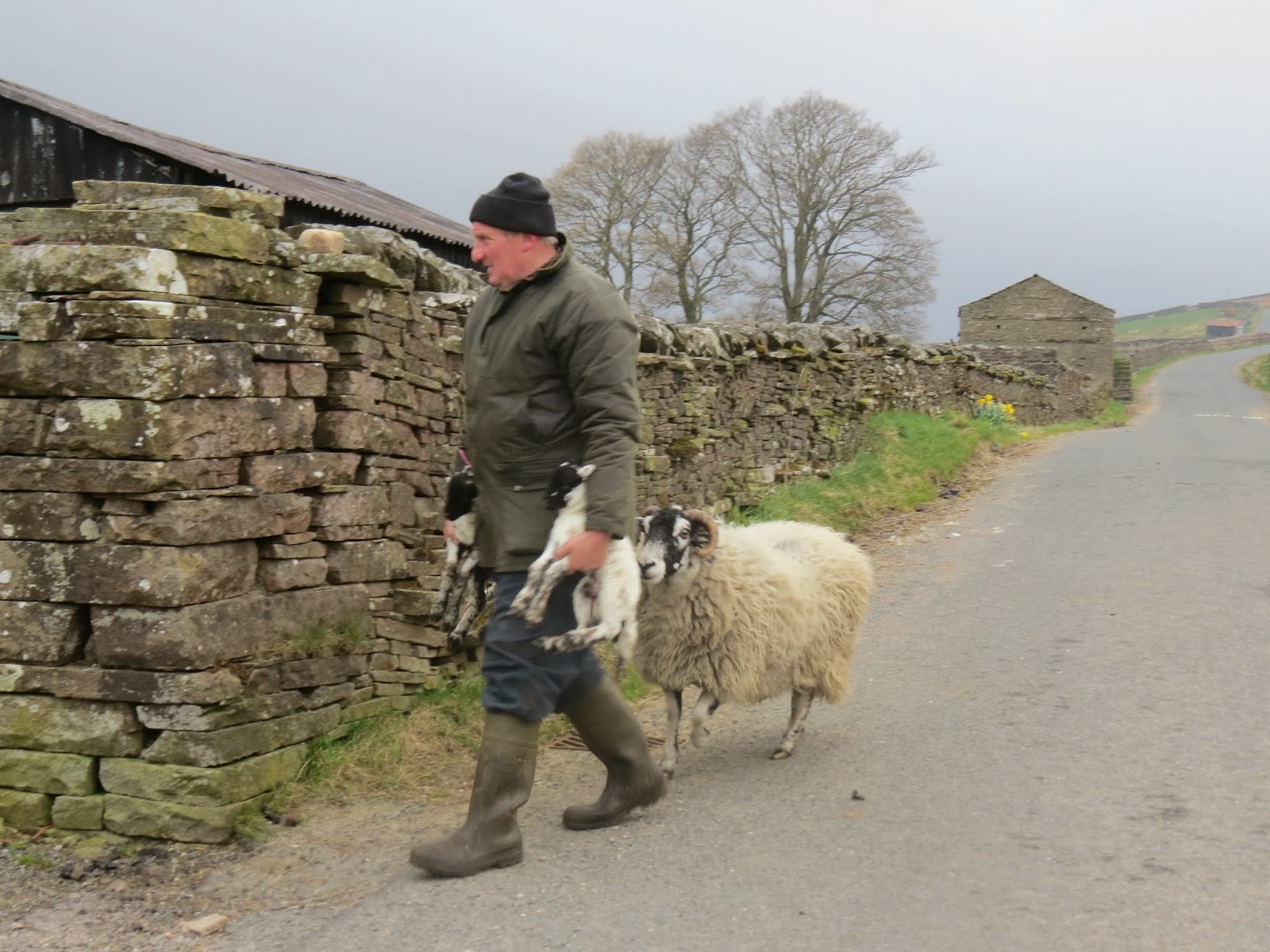 The poor little things were wet, cold & hungry so Chris brought them into the shelter of the garth by the house for shelter and attention.  Sometimes a ewe can reject her lambs when this happens but this one was very keen to have them back.
I know I'm always going on about how tough the Swaledale breed is but how many creatures do you know, at only a few hours old, could survive such an ordeal and be none the worse for it?  Certainly not the human kind!
Ah well, all in a day's work!
﻿
Posted by Pry House Farm at 15:39 No comments: 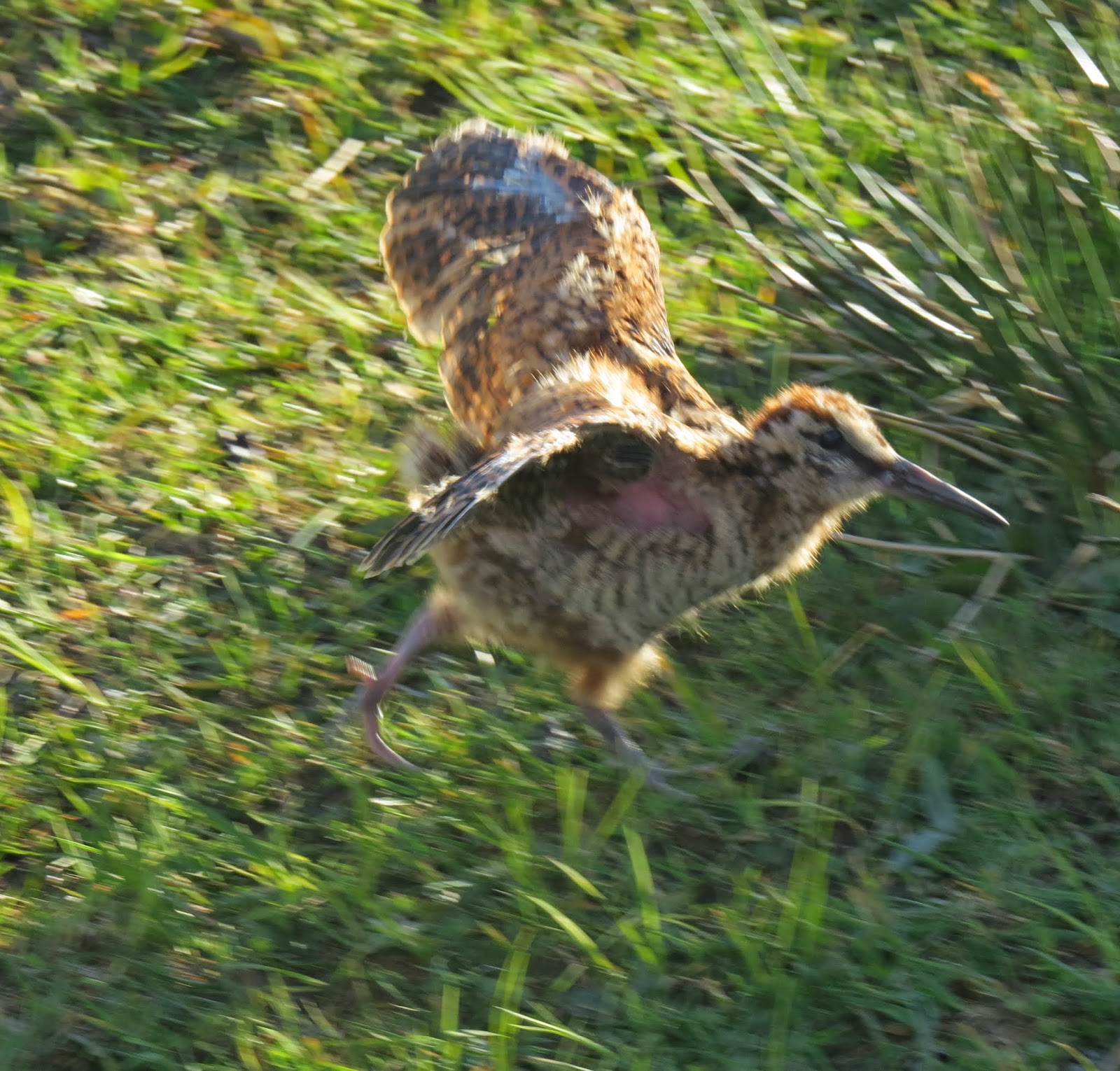 Chris stumbled across these young Curlews when he was out checking round one of his lambing fields. 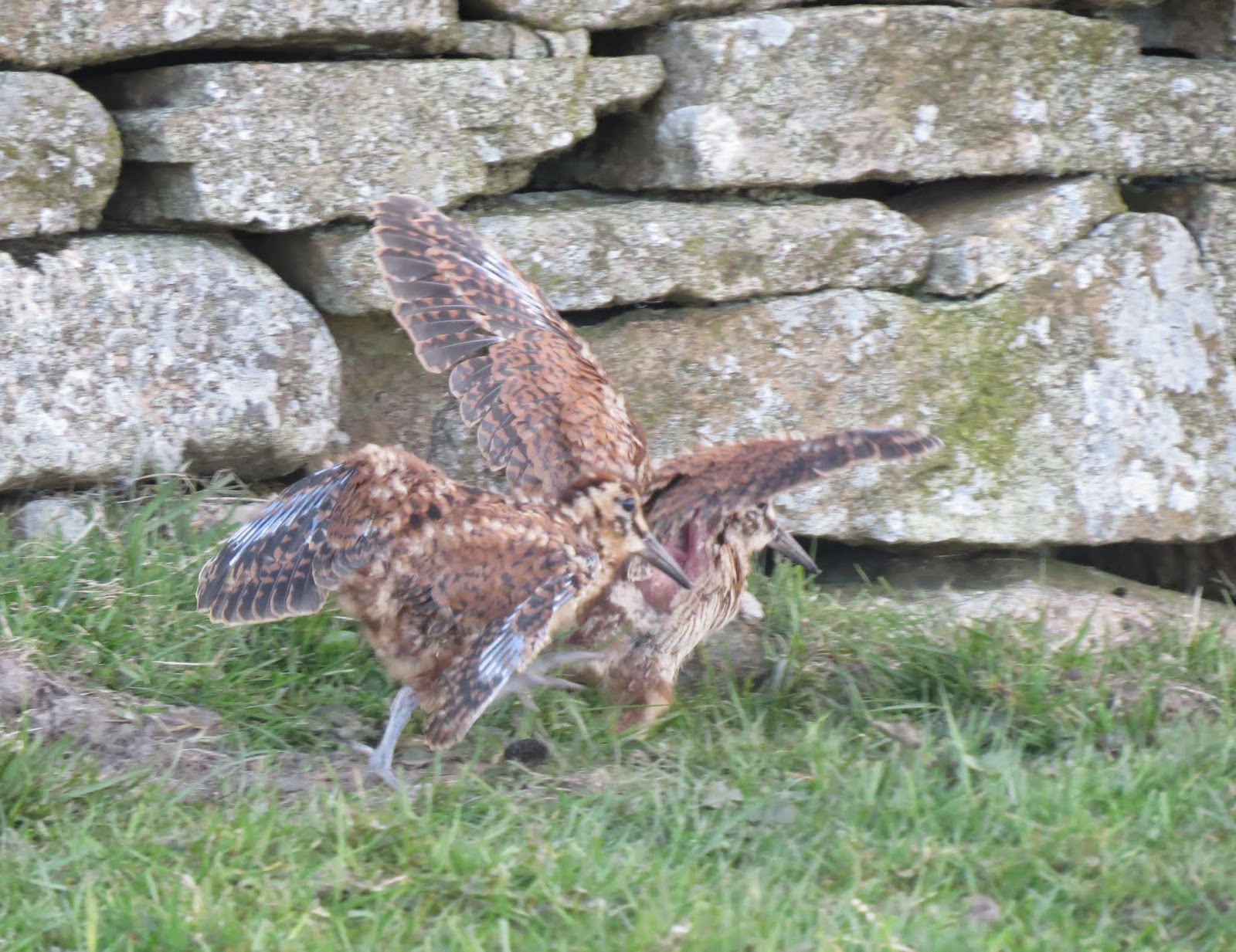 They were very difficult to photograph as they run amazingly fast.  I don't think it will be long before they take flight.
We quite literally have hundreds of ground nesting birds sitting on eggs or rearing young in the pastures surrounding Pry House but they are notoriously difficult to spot so I consider myself very lucky to have seen these two today.
﻿
Posted by Pry House Farm at 15:32 No comments:

Lambing? Its sunshine all the way 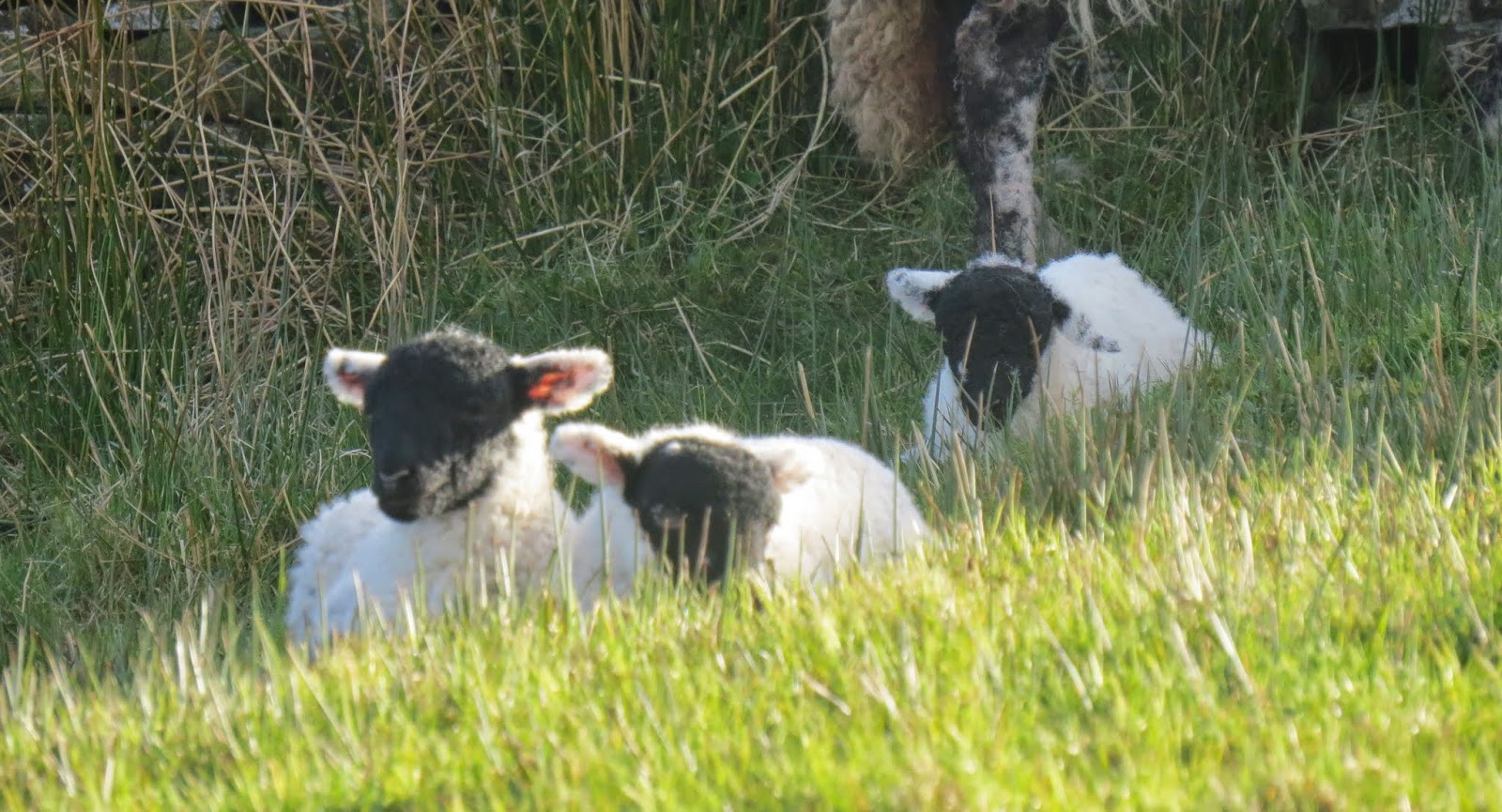 The lambs love the sunshine as much as we do. 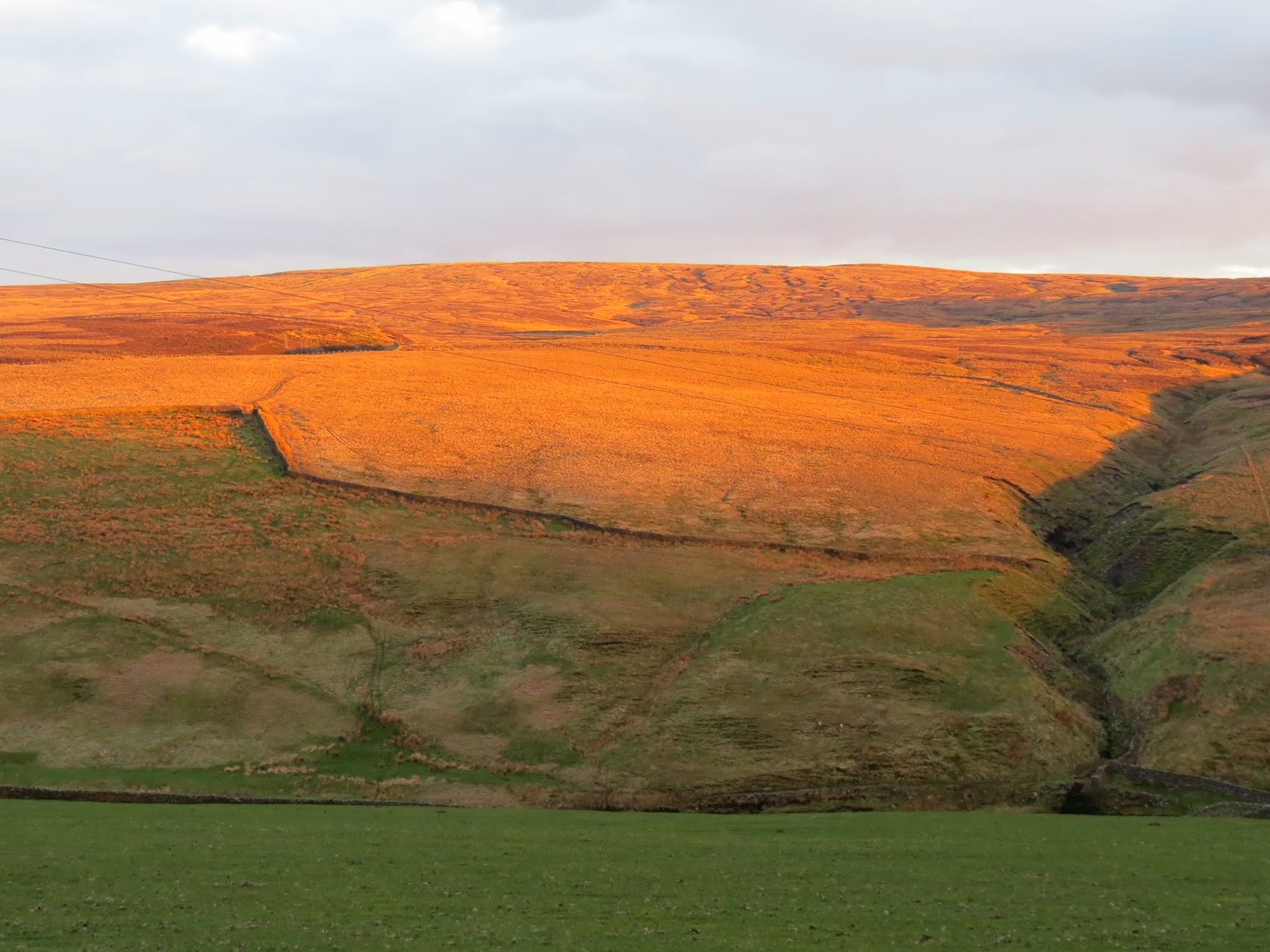 Late evening sunshine on the fell with Ash Gill in shadow .  Last year, around now, I posted a blog showing a massive snow drift overhanging Ash Gill. It was desperately cold, we had no grass and lambing time was very hard work.  This year is just the opposite - its such a treat.
﻿ 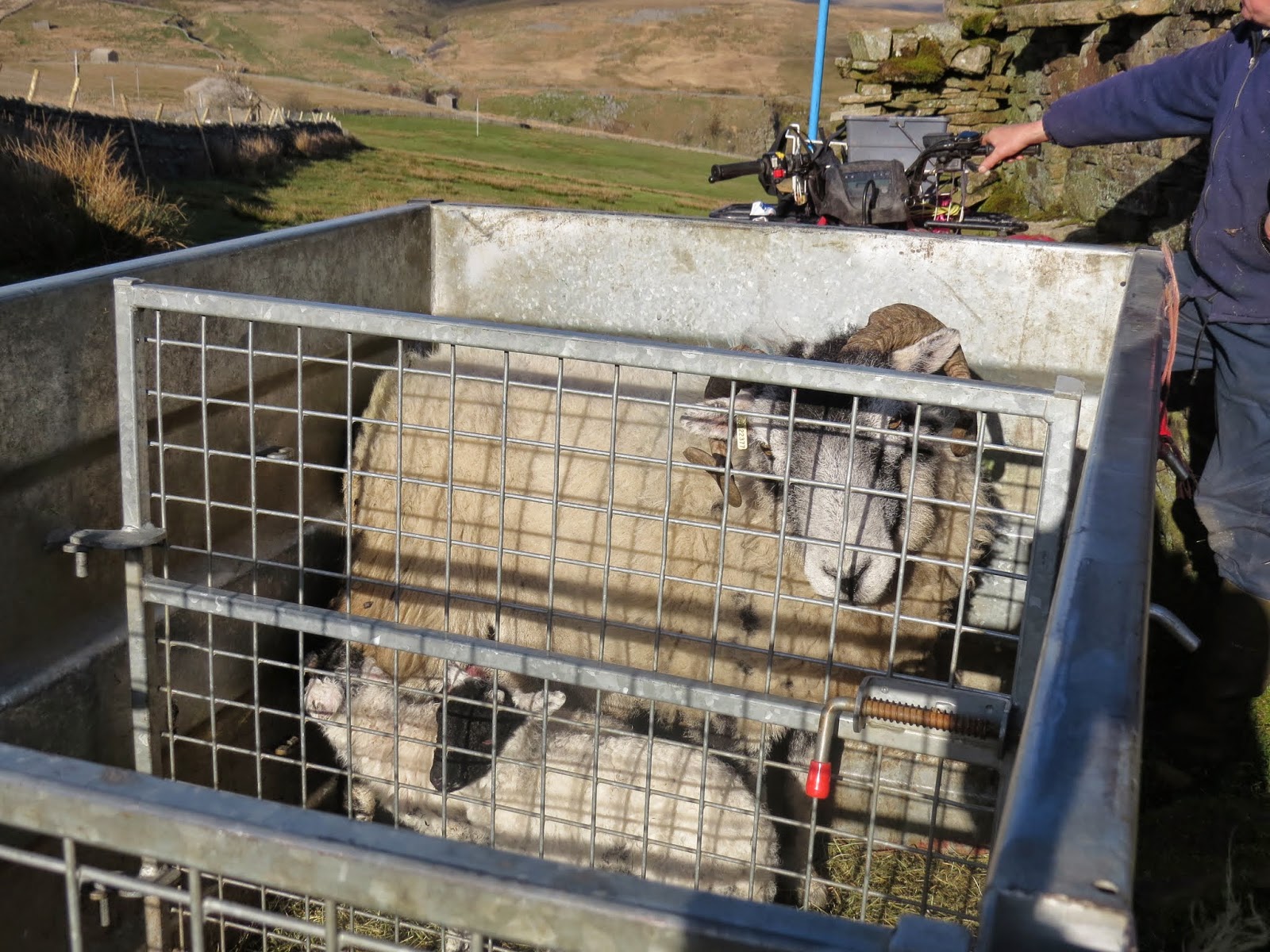 Bringing one of our old girls back to the farm.  She has two lambs and needs a bit of extra care and attention.

Bunting is being prepared to decorate Keld, Thwaite and Muker in Upper Swaledale 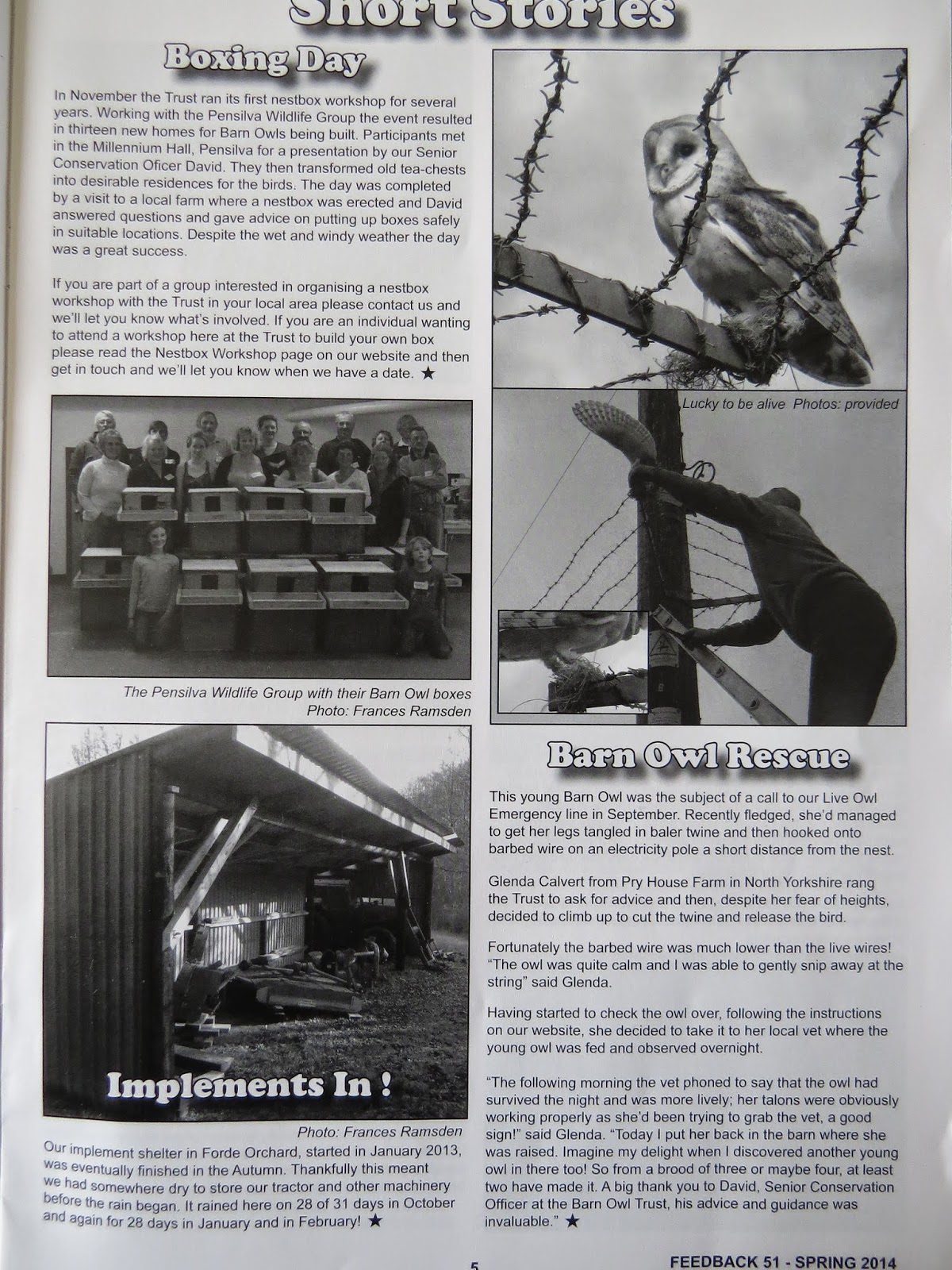 Remember last year when I daringly climbed up an electricity pole to rescue a young Barn Owl?
Today, in the post, I received a copy of the Barn Owl Trust's magazine, Feedback, and my account of the rescue and photographs are featured in the Short Stories section.

Fame at last or is it a case of 'Does my bum look big perched precariously up a ladder???!!!'

The magazine highlights the falling numbers in Barn Owls throughout the country mainly due to their natural habitat being intensively farmed which drastically reduces the owl's hunting ground.  Other factors are pesticides & poisons, major roads and hard winters & late springs.  I am keeping my fingers crossed that the two young owls born last year near Pry House and the parent birds have survived the winter and that we have more owlets again this spring.