A pair of twin calves and a single! 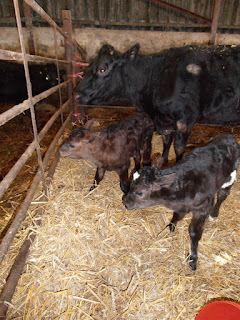 Last night one of our cows gave birth to twins which is quite unusual.  As you can see from the photo above both mother and babies are doing fine.  They are less than 24 hours old.  Whilst I was in the building looking at the twins another cow was calving.  She too has had a fine healthy calf.  The mother was very protective over her calf, snorting and stamping and pouring the ground. Chris and Raymond had to be careful as they made a pen around her and gave her fresh bedding. She won't behave like this for long, just the first few hours until the calf is on its feet and suckling.  He is only ten minutes old in this photo. 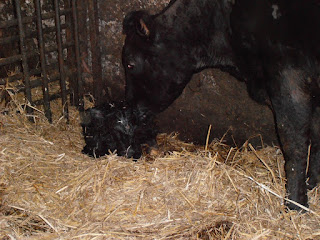