What are these railway carriages doing on the moor such along way from any railway line?  Old and rusting, corrugated roof sheets flapping in the wind, sides gaping. 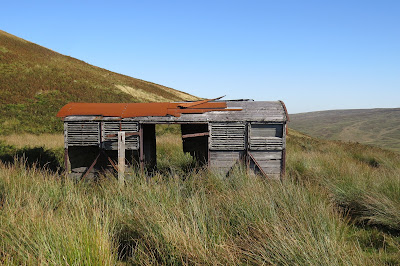 In the aftermath of the 1963 Beeching Report and the closure of a lot of the railways farmers acquired these strong railway huts to use as hay stores on the moor. Quite how they got them there I don't know!  They were filled with hay bales in summer so in the event of bad weather the hay was on site and did not have to be carted all the way from the farmstead. This was before the days of 4-wheel drive tractors when moving about was much more difficult than today. 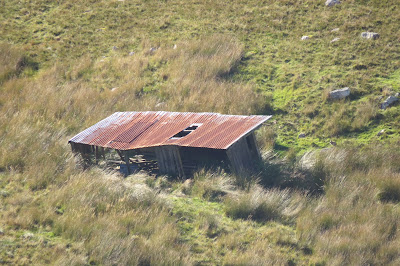 Now they lay abandoned, sinking slowly to the ground.  They are of interest to photographers, authors and artists and some come with amazing stories.  See Richard Wall's imagine of our railway hut at https://theoldschoolmuker.co.uk/the-old-school-muker-photography/ which was then painted by Sue Nichol https://www.facebook.com/staithesartist/and is now owned by friends of ours in Keld. 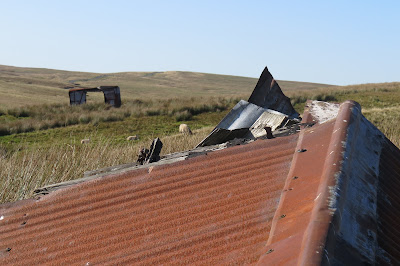 But by far the most gripping story involves the two buildings in this photo; one an old railway hut and the other a corrugated metal shed now collapsed.

In March 1979 two young Dutchmen drove past Pry House Farm blissfully unaware of the blizzard conditions and deep snow ahead of them.  Several miles past the house the car ran into a snow drift and was unable to go neither forward nor back.  They stayed in the car all night but with no food or water and realising the car was in danger of being buried in snow the two lads decided to walk.  They remembered passing a house (Pry House) so started to walk back in that direction.  Two pieces of good luck that day helped them survive.  Firstly despite being inadequately dressed for the severe weather conditions they stumbled across this old hut and took shelter. 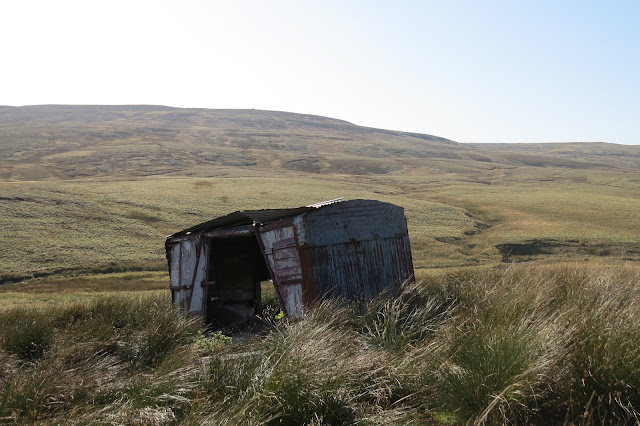 The second piece of good luck came in the form of a farmer and his dog.  Clifford Harker farmed at Pry House Farm in those days.  During the winter of '79 Clifford, like all other farmers at the top of the dale, walked every day onto the moor to his hay huts to feed his hungry sheep (Chris reckons he and his dad walked onto the moor for 30 consecutive days that winter).  Whilst sheltering, one of the young men heard a dog bark and realised that if there was a dog out there in the snow then there would be a man out there too.  The blizzard cleared for a moment and Clifford saw them.  Having finished feeding his sheep he guided them the 31/2 miles back to Pry House and safety. 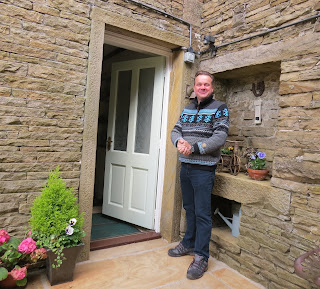 And how do I know so much about this story when it was long before my time at Pry House Farm?

I was lucky to hear this story first hand when Rolph, one of the young Dutchmen whose fate could have been so different had it not been for a dedicated farmer, his dog and the railway carriages on the moor, came to stay bed & breakfast with us in July 2015. 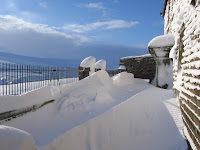 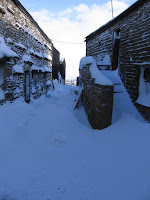 Jenny Harker was recorded telling the story for the YDNPA Every Barn Tells A Story project.  Watch the video here https://everybarn.yorkshiredales.org.uk/video-every-cowus-tells-a-story/