The Story of Old Hoggarths

The cowus and stable are all that remains of the original Hoggarths farmstead and is why its called Old House.  Destroyed in July 1899 by a mighty cloudburst that thundered down Ash Gill flooding the farmhouse.  As it swept through the upper dale bridges were washed away and properties flooded with water.  Hoggarths beck that runs on the other side of the buildings is littered with huge boulders that came down with the flood water.

My father-in-law, George Calvert, once told me the story.  On the day of the storm George's father, Kit, had been to Tan Hill with his horse and cart for coal (there was a coal mine at Tan Hill in the 1800s).  He knew a storm was brewing however when he got home he stood his horse, still in the shafts, in the building and went into the house for his dinner.  His wife, Mary, was very anxious about the heavy rain, the flooded beck and the thunder & lightening but Kit insisted on having his dinner (a mid-day meal is called dinner in the north of England).  She kept exclaiming that they had to get out and finally that is exactly what he had to do.  He left his dinner and rushed upstairs to escape the incoming water.  He kicked out a landing window and they scrambled out onto the high ground behind the house.

When the storm subsided Kit went to see what had happened to his horse.  It was stood, up to its neck in water but otherwise none the worse.  He was also able to rescue his good dog which was swimming round and round in a stable.  I also believe a teacup survived and was discovered swirling around in flood water at Bridge End. 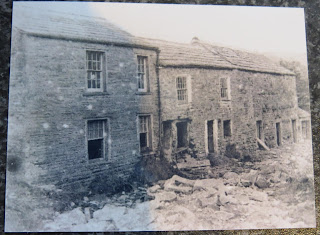 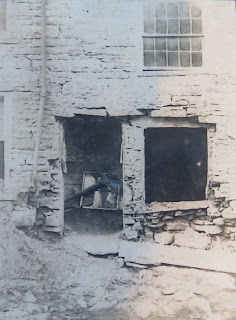 The damage to the dwelling was immense and Kit
was ready to pack up and leave Hoggarths but his
landlord wouldn't hear of it.  Kit was a good farmer and a valued tenant and the landlord promised he would build him a new farmhouse somewhere where it would never flood.  And that is why today, Hoggarths stands on  the opposite side of the valley, high above the river in total safety.

I cannot guarantee the accuracy of this story - after all the narrator was already in his eighties and the incident had taken place over 20 years before he was born. Did I mishear something? Have I forgotten a fact or detail?  The wonderful thing about stories passed on by word of mouth and handed down through the generations is that sometimes little bits get lost,  sometimes they get embellished or exaggerated with the enthusiasm of the storyteller or as each person adds their own interpretation.  If anyone can add or correct the Old House story please get in touch at glenda_calvert@hotmail.co.uk I would love to hear from you. 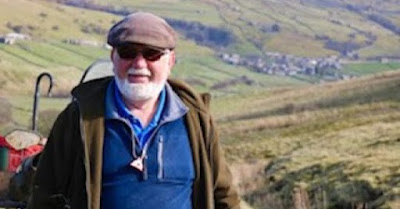 I can however vouch for the honesty and accuracy of the short documentary, Mr Swaledale.  Made by Georgia Hird, a local Swaledale girl, as her final project for her degree in film and production.  Starring local farmer, John Waggett, the film is an absolute delight;  the scenery is stunning, the film work meticulous and John is an absolute natural.  View it on Youtube - it is not to be missed.